Born and raised in Seoul, Korea, HeeJune Shin came to the United States in 1978 and moved to Rochester, MN with her family in 1992. Prior to pursuing the study of painting as a career, she obtained an MPH in nutrition, worked as a nutritionist, and raised three children.

HeeJune received the McKnight Established Artist Grant in 2012 and 2016 as a colorist. The Ephemeral quality of light is the subject of her painting. Being convinced that color is the most effective tool to capture it, she has established herself as a colorist in the tradition of Monet in France, Hensche in America. The colorists create an illusion of light in colors emphasizing the light key of the moment. She uses a palette knife to paint. The variety of strokes from her palette knife speaks for the tactile sensitivity she acquired from many years of study in calligraphy is Seoul, Korea.

“I am excited to be in front of a white canvas looking at the objects before my eyes. It is never the same: light in different weather, seasons, times of the day. Each moment is its unique set of colors: it is uniquely a song. I relish the freshness and intimacy of strokes that a palette knife brings. It is my quest that my painting is as authentic as a personal commentary on nature.” 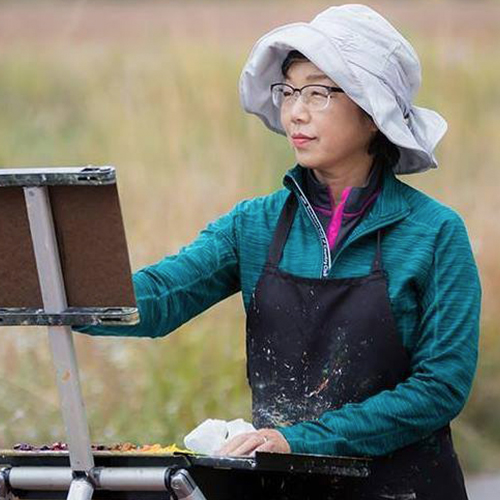